You are here: Home / Festivals 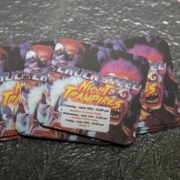 Last week, Animortal Studio attended the Annecy International Animated Film Festival! We took our puppets, showcased our slate of projects and even screened the World Premiere of Chuck Steel: Night of the Trampires.

The set-up began on Friday with us packing the moving van with all our bits and pieces for our tour to France, here’s some pics:

We attended the MIFA Film Market to showcase a range of new ideas in development – we got quite a bit of interest from other companies and people wanting to see our exhibition.

The biggest event happened on Tuesday night – the official world premiere screening of Chuck. The theatre was packed, the audience was fantastic and we were thrilled by the reaction. It was wonderful to see our work received so positively, and we’ve greatly appreciated the feedback we received. Thank you for all the reviews!

Throughout the week, we had two other screenings as well as the opportunity to meet some great people and companies. We loved bringing Animortal to the world stage and getting that firsthand interaction that just isn’t possible during production.

We’d like to thank everyone who came up to our stall, chatted to us and attended our screenings. Overall, Annecy spelled out a great deal for the future of the studio. Many doors have opened and we’re excited to move forward with new productions. See you at the next event!